or… ‘why you should never agree to an interview with a sceptical journalist.’ 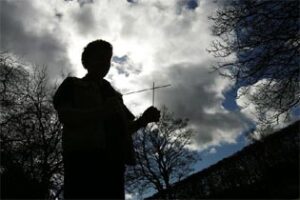 IT is only after I have parted company with Grahame Gardner that I realise how we should have arranged to meet. Grahame is a dowser. In fact, in the rod-twitching world of dowsing he is something of a mover and a shaker, assuming that kind of thing is allowed.

After just a few minutes in his company I realise that dowsing involves a lot more than looking for water with a couple of bent coat-hangers in your mitts, although he assures me that this is part of it. As we talk it emerges that Grahame dowses to divine the answers to many questions, even down to which foods to exclude from his diet, and which vitamins to take. Which leaves me puzzled as to why I had to describe myself over the phone before we meet for the first time in a coffee shop in Glasgow. Could he not just have dowsed me out of the crowd?

As it is, it is me who spots him first, based on his somewhat basic description of himself as a man with tight curly hair who will be wearing an anorak. Staring out of the window I spot a greying Leo Sayer lookalike with a greeny-brown coat. I catch his eye, and before you can say “show us your rods”, we have introduced ourselves and are seated together at a table. Just call it intuition on my part.

Grahame is a lighting engineer by night, but by day he is a dowser. He is a council member of the British Society of Dowsers (www. britishdowsers.org), and this summer will be running the first BSD-approved foundation courses on the ancient art to take place in Scotland.

Grahame has been dowsing since his teens, when he first experimented with it to find water. He progressed to using it to search for items he had lost, and in the last five or six years has, quite literally, got into the swing of things by using a pendulum as an aid to making decisions, including those about his diet.

The BSD has around 1,400 members, of which a couple of hundred operate out of Scotland. It cannot claim to represent all those who dabble, however. Glasgow’s own dowsing society is not affiliated. “They seem to be an interesting bunch,” says Grahame – the implication being that they are a bit ‘out-there’, even for dowsers.

So how does it work? “That is a good question,” says Grahame. “If we knew that, life would be a lot easier.”

There are various theories. It could be that water and mineral dowsers pick up very weak underground radiation. But that does not account for remote dowsing, where maps and plans are used, or the fact that it can tell you what to eat. Quantum theory, which is always used by non-scientists seeking to prove that the world is odder than we think, is mentioned. But the real answer to the question is that nobody has yet demonstrated any convincing explanation for how dowsing might work, nor any scientific evidence that it does.

Among dowsers the favoured explanation is that their craft gives them access to things that are already in the mind, but at a layer not normally accessible. “Dowsing is a bridge between the subconscious and the conscious mind,” says Grahame.

To form that bridge most dowsers use some kind of instrument, although not all. “I know one dowser who has trained his eyeballs to react. If you put him in a field, his eyes will stick to what he is searching for.” This sounds a bit like staring to me, but I let it pass.

All this chat about energy forces, radiation, sticky eyeballs and the ability of pendulums to answer important questions about your life is starting to make me a little nervous. I ask the obvious question, “Do people think you are mad?” To which I get the expected answer, “Yes.”

We head up to the Botanic Gardens for my practical instruction, which starts with the pendulum. Grahame, who always carries a rather tasteful small brass one for personal use, produces a giant wooden learner’s version for me. Before I can ask it any questions, though, I need to find out how it will indicate positive and negative answers to me. Grahame tells me that most people’s pendulums will start to circle in a clockwise direction to indicate yes, and anticlockwise for no.

Sitting on a bench, my feet apart, I start the pendulum swinging back and forth. Then, staring intently at the swaying wooden ball, I say, “Show me my ‘yes’ position.” Nothing. We try ‘no’. Still nothing.

Meanwhile, Grahame has set up a game of Find the Lady. A £1 coin is placed under one of three pieces of card on a bench. We are to use our pendulums to find which one. I go and get it spot on, mainly because I can see one card is sitting higher than the others.

When it comes to Grahame’s turn, I arrange the cards so they all sit the same. Grahame goes up the row and chooses the last one. He is wrong. He goes again, with just two left, and gets it wrong again. “I think my readings must be reversed on this one today,” he says. “It’s not a very good advert, is it?”

If I wanted to be a bit more scientific, we could stick here. Fifty goes at Find the Lady would show whether the pendulum produced better results than chance. But that might also spoil the fun, and we have only just started.

Now we move on to the main feature, dowsing for water. We spend some time pinpointing an underground stream, tracking its course, testing the direction of its flow and measuring its depth. Whether any of it is accurate or not we cannot say without the use of major drilling equipment – which neither of us happens to have brought today.

Next Grahame dowses me for my general health aura. I stand next to a tree and he marches towards me, a rod in each hand. Just over an arm’s length from my body the rods cross and he stops. My aura is strong; normally, it would be just under an arm.

Then I move over to stand on the edge of our underground stream. Again Grahame marches towards me, but this time the rods do not cross until he is just a foot away. The hidden stream has sapped my energy.

I have a go, and, oddly, get exactly the same results. Over at the tree I find Grahame’s aura is strong. By the stream it is weak. Handed the classic dowser’s V-rod and told to march towards the stream, I find the thing goes nuts in my hands as I reach what we have already divined to be its centre. Clearly this is evidence of something. I don’t doubt that it shows my mind is sending out signals of which I am not entirely conscious. But what they are signs of is another matter.

After a shaky start with the pendulum, I am now getting things ‘right’. I am happier when my rods twitch and my pendulum sways. I find it satisfying to find what I am looking for, although it does help a lot if I know where it is to start with.

The dowsing is working. Yet I suspect that all it is showing is the enormous suggestibility of the human mind, and that common human desire to fit in. After all, what would happen if I got no results at all? Grahame would probably think I was mad.